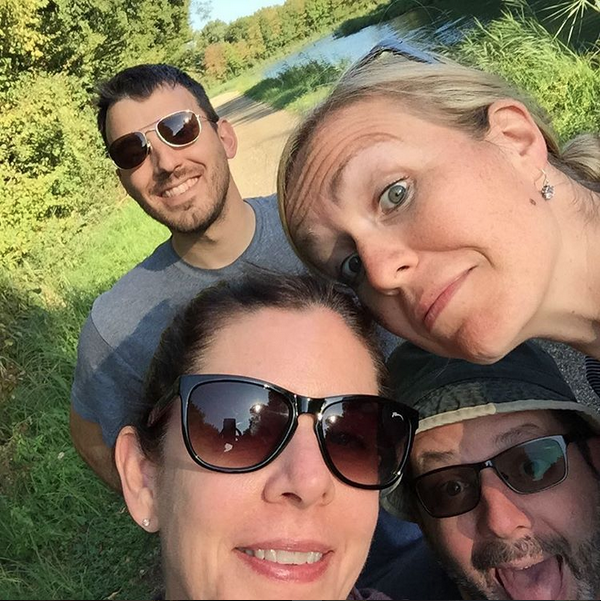 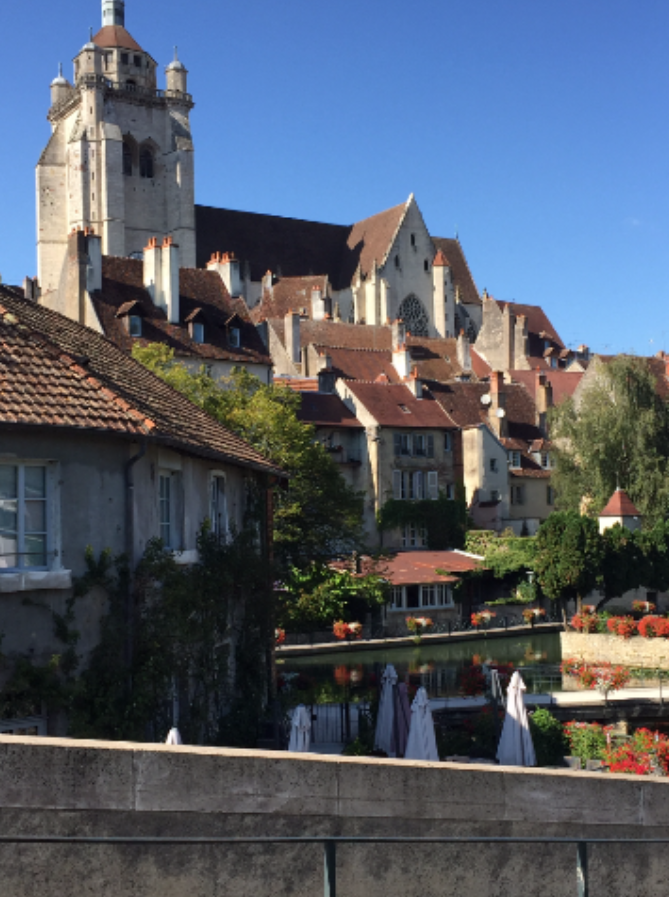 Exploring the city of Dole. 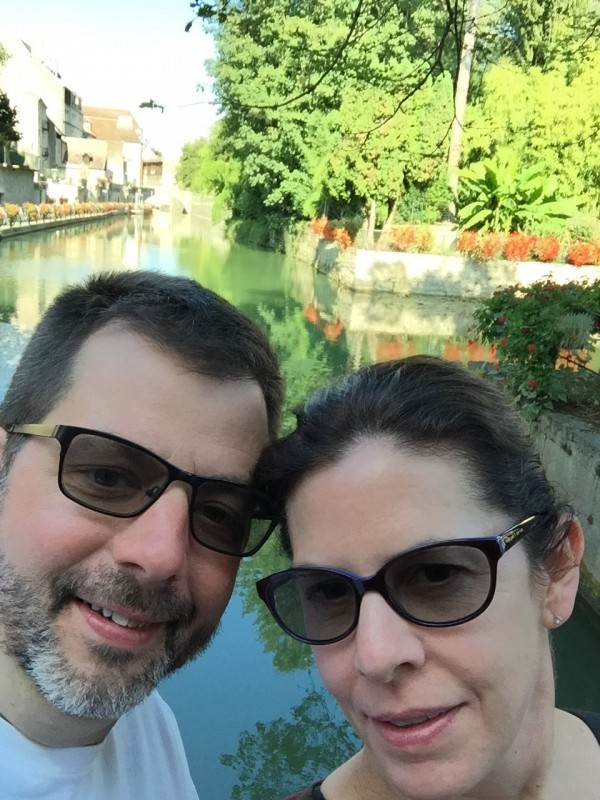 In search of the perfect selfie in Dole. 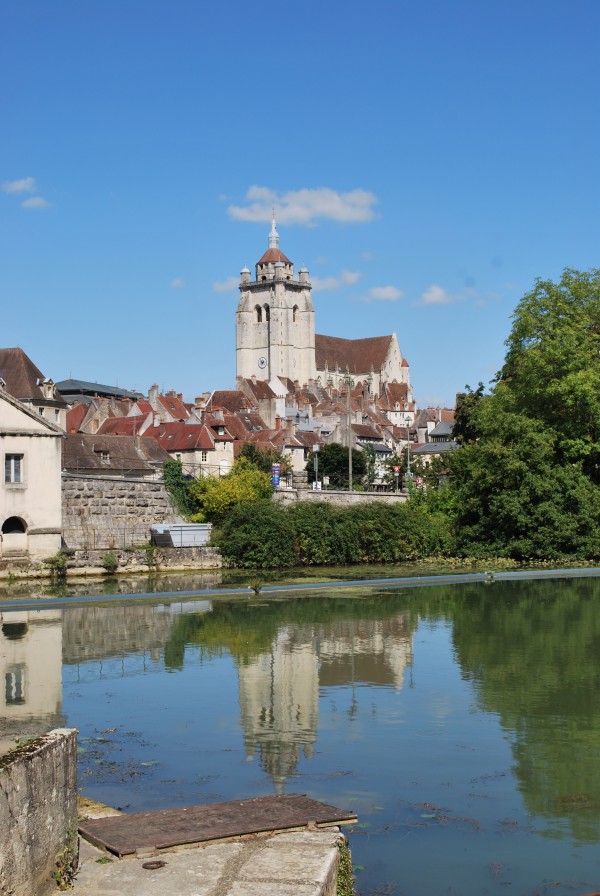 Dole, from over the bridge. 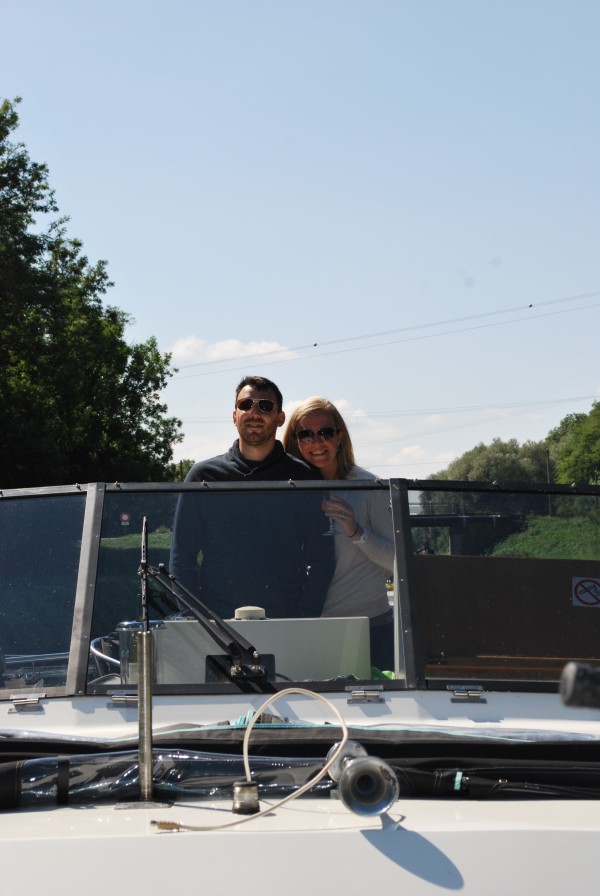 Alison and Kyle at the helm. 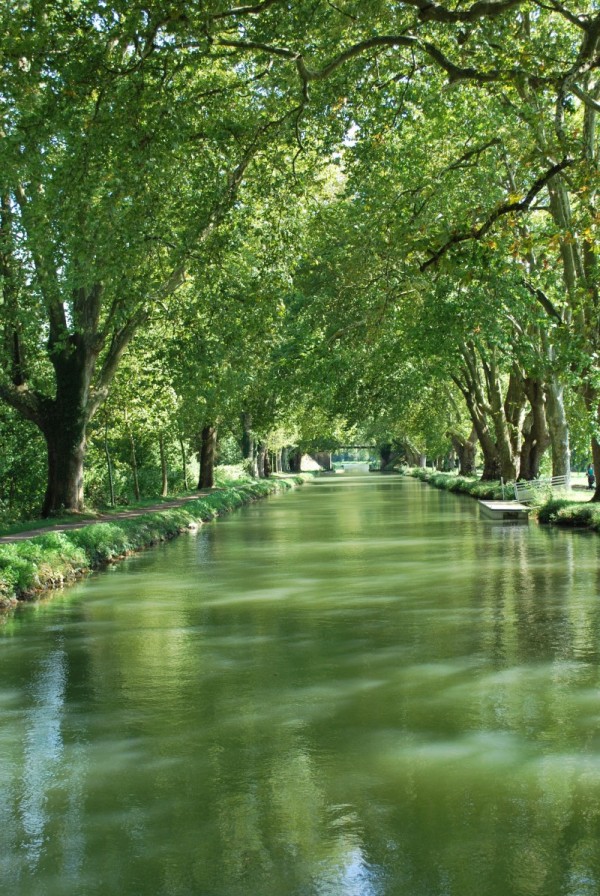 A magical afternoon on the Canal du Rhone au Rhin. 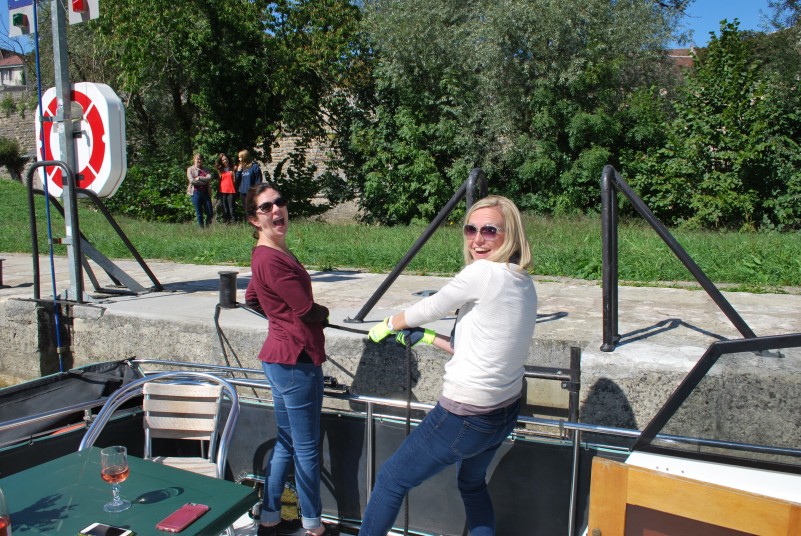 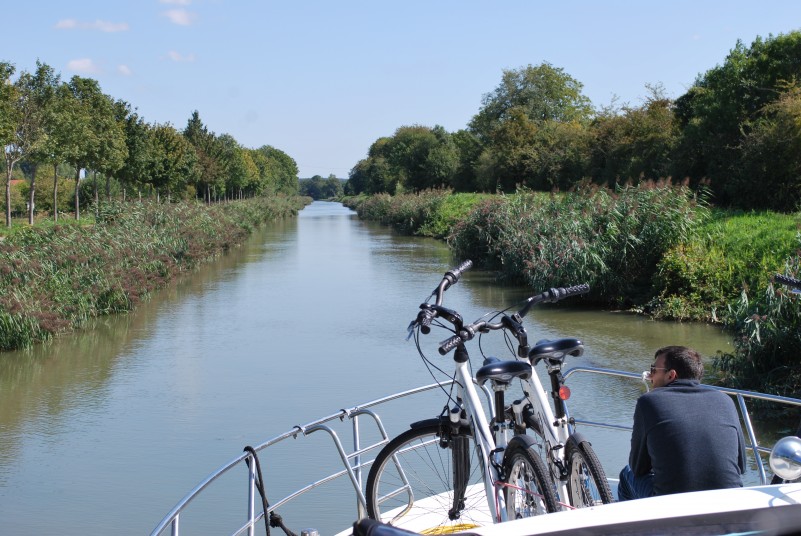 Floating up the Canal due Rhone au Rhin. 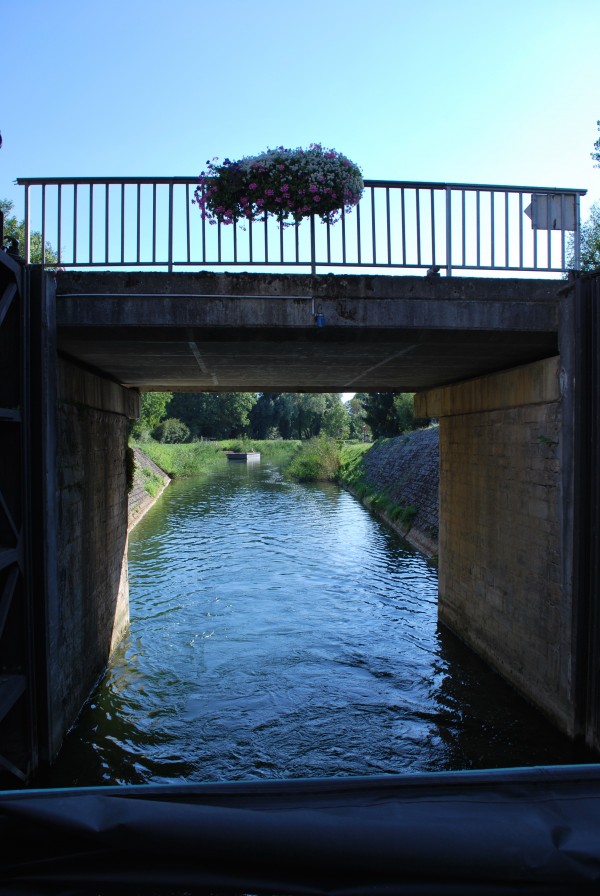 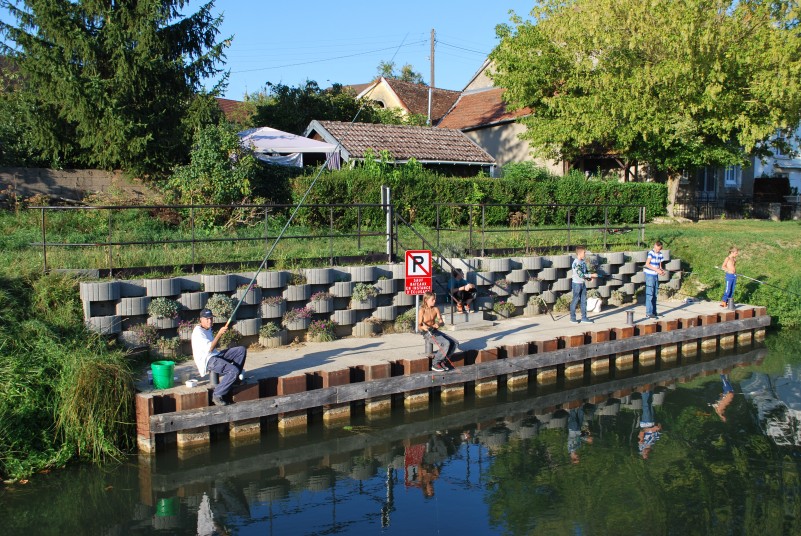 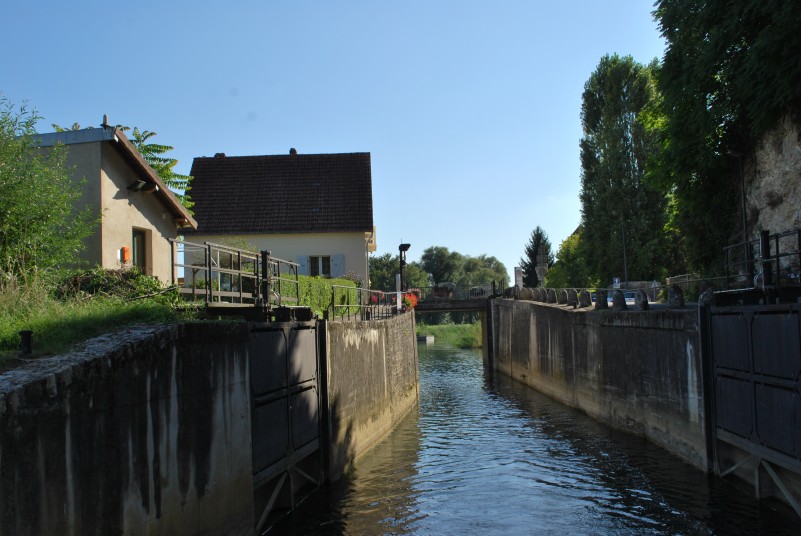 A narrow passage on the Canal du Rhone au Rhin. 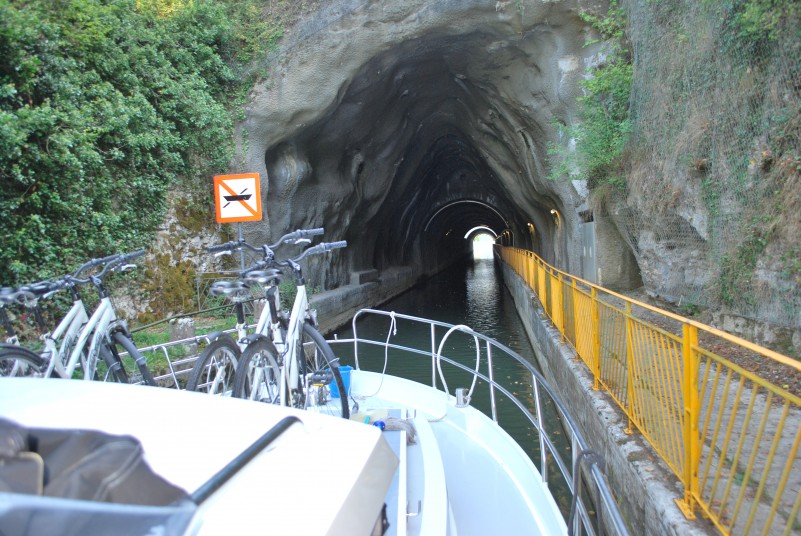 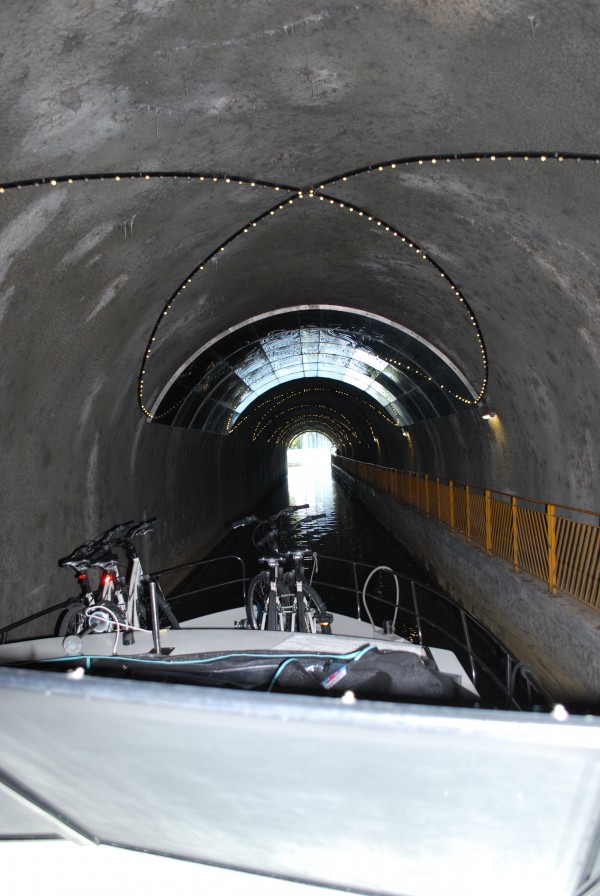 Inside the Souterrain de Thoraise. 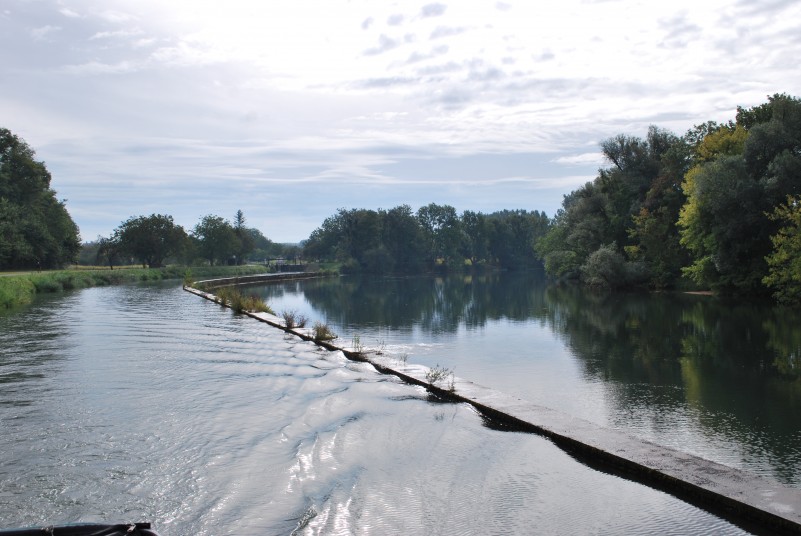 Another Bourgogne barge vacation in the bag! Instead of waiting for a wave of literary inspiration and flowery thoughts to wash over me about the trip, which is not likely to happen soon, I’m just gonna lay down a bare bones report for anyone who’s interested in hearing about our latest adventure. Proceed at your own risk. First a bit about our trip name. For this our fourth trip, we were accompanied again, for one week, by our good friends Alison and Kyle who also joined us in 2013. The trip name was derived from our mutual fascination with this blog, which has nothing to do with Bourgogne, but we can’t stop laughing at it. Also the letters RB (Renaissance Baby) are the same as the letters for last year’s trip name Rowe Bateau (a.k.a. “row boat”). We had a logo and team hoodies made up for the occasion (right).

We chartered a self-hire boat again the first two weeks of September, and it was our second time on the Annelies with Saone Bateau, a fabulous, small self-hire company out of Gigny-sur-Saône (just south of Chalon-sur-Saône). We highly recommend you check them out if you’re looking for a self-hire charter in this location. After heading up the Saone and spending a night in Verdun-sur-le-doubs, we decided to head into the Canal du Rhone au Rhin to the city of Dole in the heart of the Franche-Comté region. We continued on from Dole to the larger city of Besançon where Alison and Kyle sadly departed after the first week. We made our way back down the canal to Saint-Jean-de-Losne, and from there we headed back down the Saone to the Canal du Centre, which fortunately was open. (It’s sometimes closed this time of year due to lack of water.) We traveled up the Canal du Centre as far as Saint-Léger, stopping in Franges and Santenay, before making our way back out of the canal and back to Gigny-sur-Saône. For anyone interested in the timing of our stops, here’s the exact itinerary we took:

In case you’re wondering about how long it took to get from one place to another, an average day took about four hours of motoring. Some days were a lot more (Day 9, about 8 hours) and some a lot less (Day 12, about 2 hours). If it sounds boring, consider that you’re never going very fast, and you can basically just sit on deck drinking wine while looking at the French countryside go by. Also, on the canals, we were pretty much always occupied by going through locks.

On this trip we spent about half of our nights at actual marinas or tie-ups with water and electric, and the other half just staked up to random spots along the canal. This is the part where I knock on wood and say that we’ve never had a problem finding a spot, even at some of the more popular marinas, although on more than one occasion we’ve been the last boat in. I can imagine that during the busier season it would be more of a problem. One benefit to staying in the canals is that you can tie up anywhere; on the Saone you are restricted to the marinas. This year’s only close call came in Saint-Jean-de-Losne at the usually-crowded tie up on the dock in front of the city. We had been planning to continue to Seurre, but after seeing storm clouds and lightening flashing in the distance it seemed like a good move to call it a day. We took a chance tying up in a spot reserved for a larger hotel barge. After asking around, we were told by a reliable source they had just departed and wouldn’t be returning that night, so we really lucked out.

As the team’s official meteorologist, I began obsessing out the weather weeks in advance. Our previous trips have ranged from the sublime to the ridiculous in the weather department, with Alison and Kyle experiencing the ridiculous in bad weather on their last trip with us. We all had fingers crossed for good weather and our first week came through with beautiful sunny days and cool nights. Pretty much perfect. Unfortunately things took a turn for the worse the second week, beginning with the nasty thunderstorm in Saint-Jean-de-Losne. Two days later another storm came through and all boats were advised to stay off the Saonne, a warning we had never heard of before. Fortunately we were safely tied up along the Canal du Centre in Santenay so we got nothing but lots of rain. 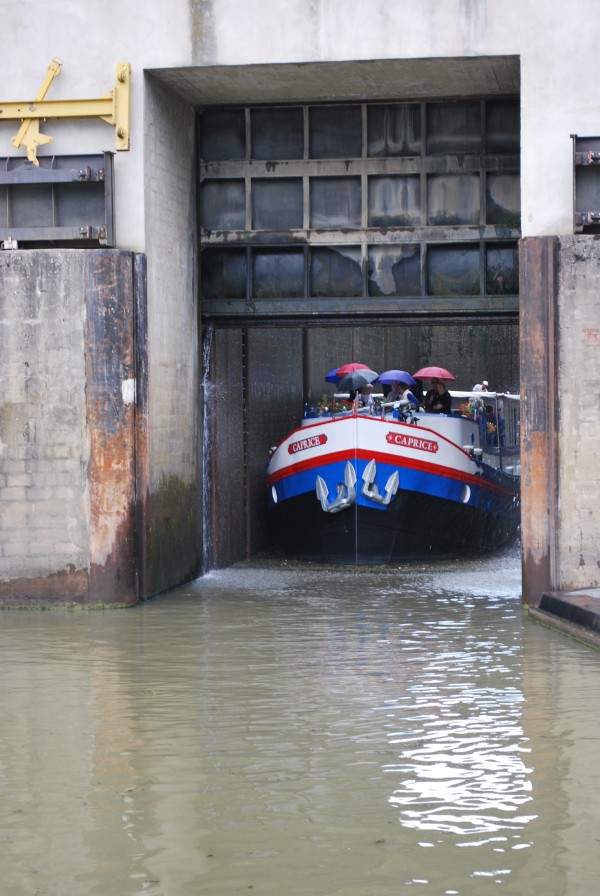 A hotel barge emerges from lock 34 b on the Canal du Centre. 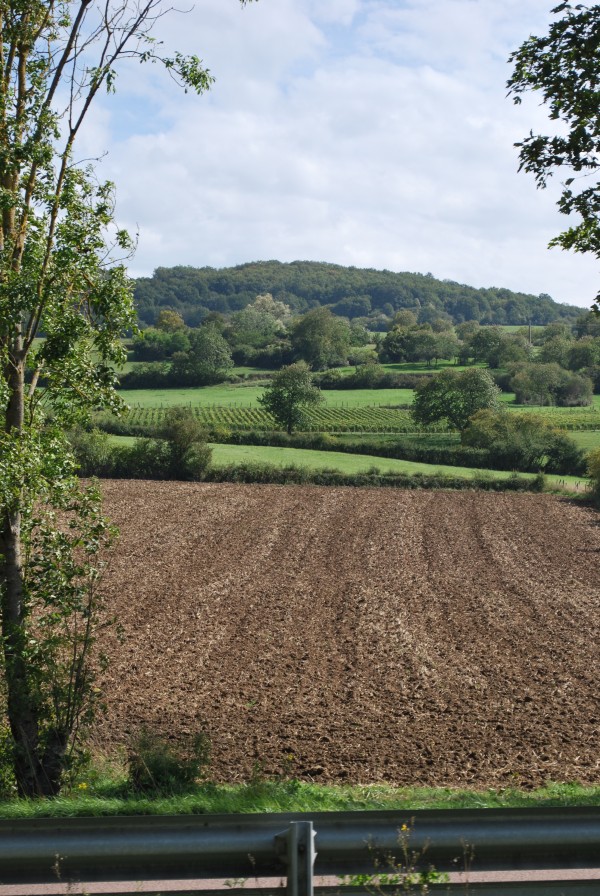 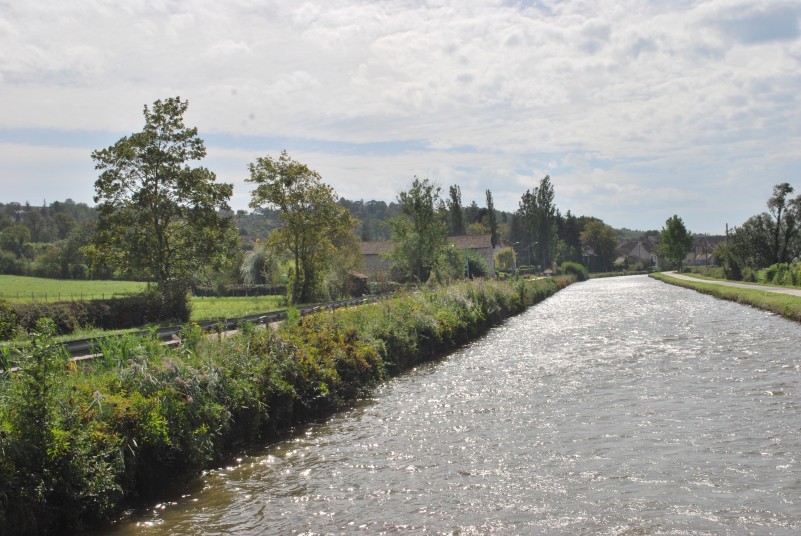 The canal gets windier. 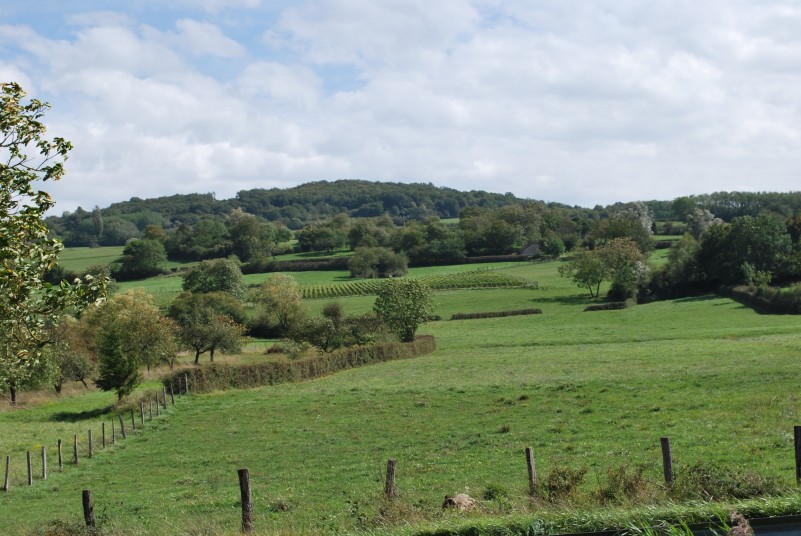 The countryside in Santenay. 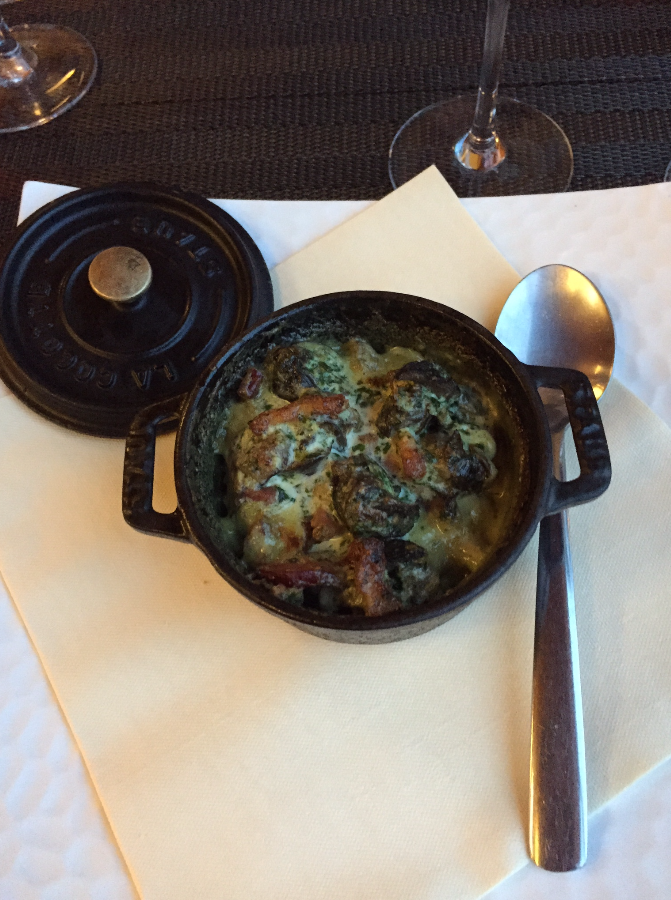 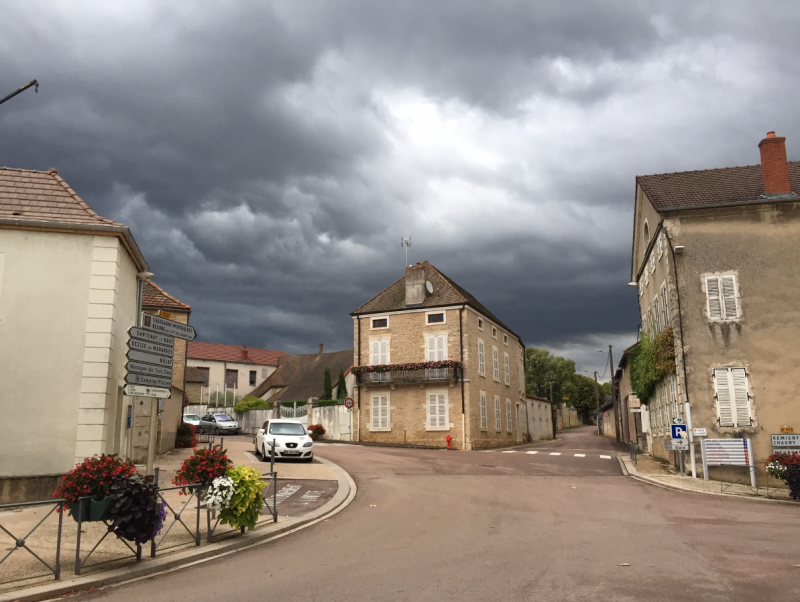 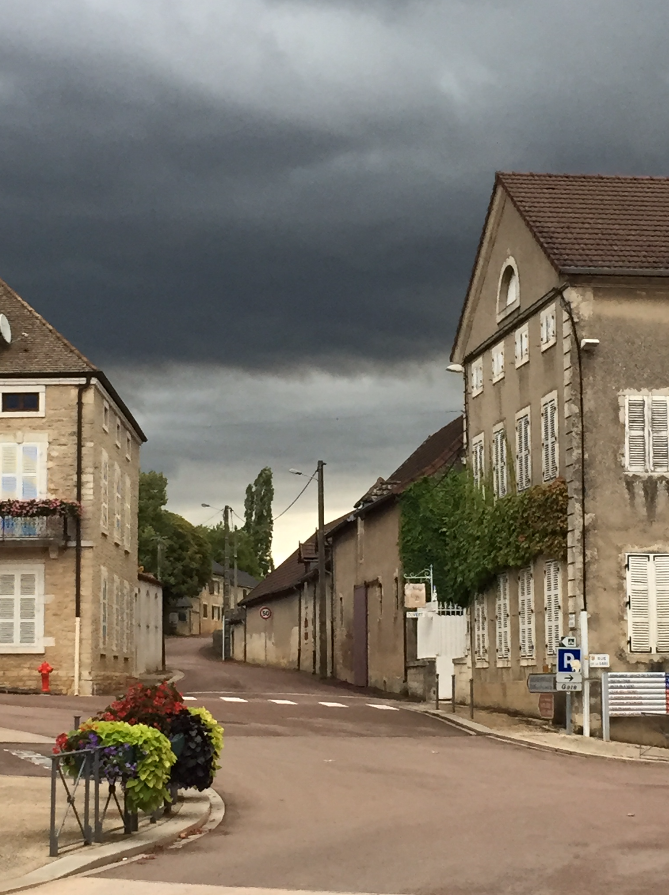 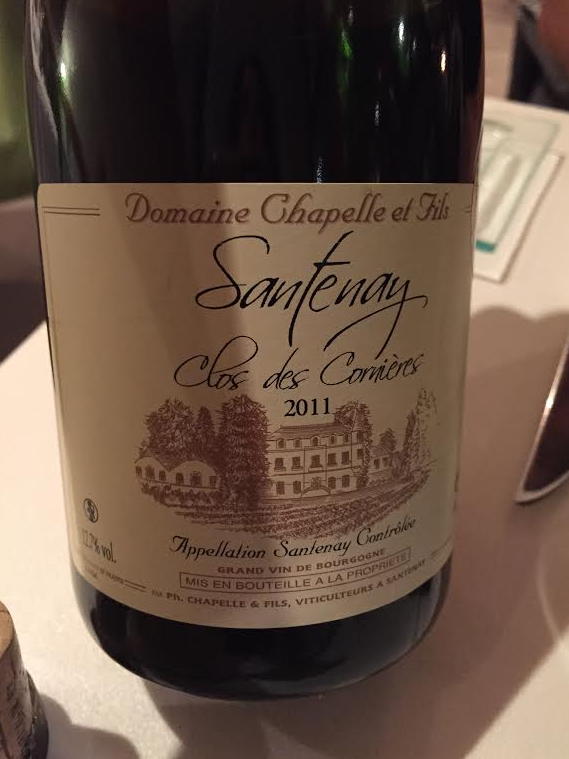 Another amazing bottle of French wine with dinner at Le Terroir. 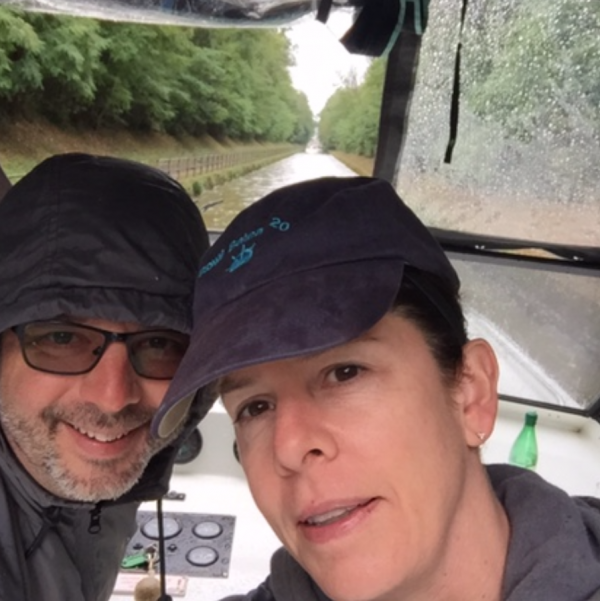 Pulling out the foul weather gear. 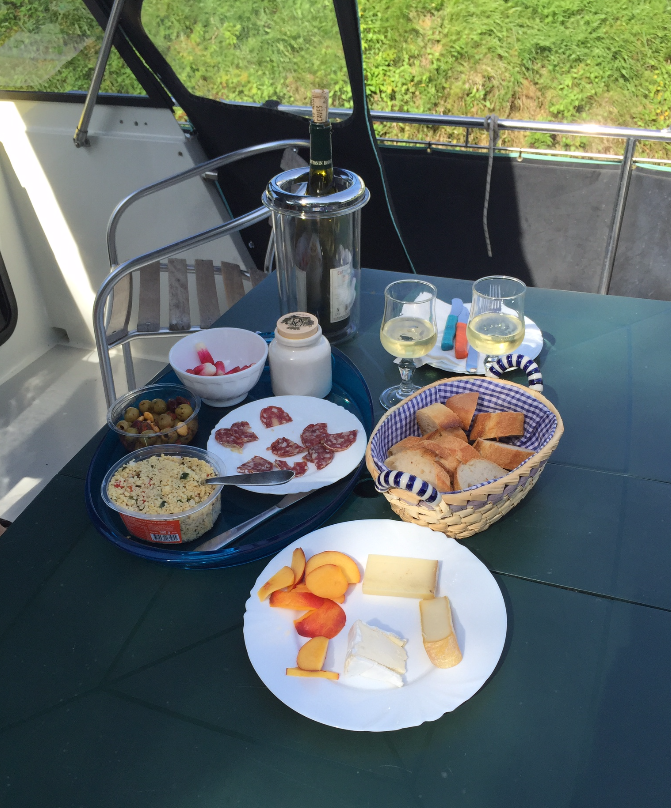 Lunch goes on, rain or not. 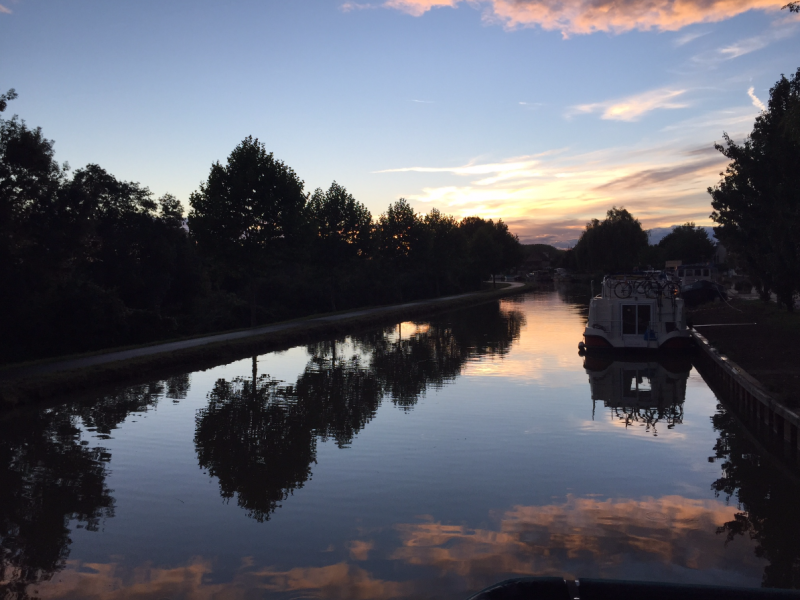 Tranquil tie up in Franges after the storm. 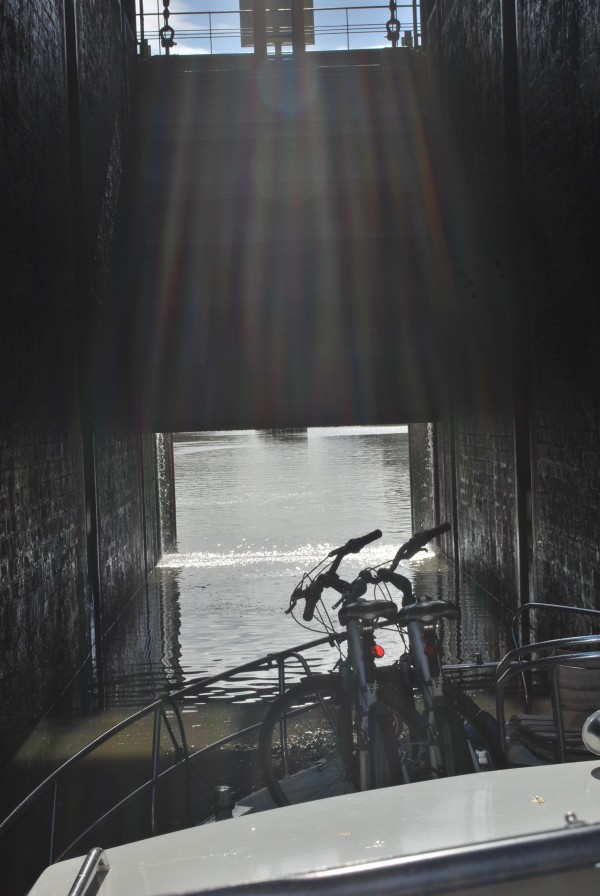 Exiting lock 34 b on the Canal du Centre.

This is the part where I wish I had taken pics of all the fabulous meals we had on this trip, but not wanting to be “that person” at the table, I am left with only a list of some amazing places where we ate along the way:

La Halte Nautique (Gigny-sur-Saône): This amazing restaurant in the middle of nowhere is right at the Saonne Bateau base (also in the middle of nowhere), so we ate here both our first and last nights, as well as last year. Menu highlights include frogs legs, Bourgogne escargot, river fish “fritures,” and great local wine. A find.

Le Gustalin (Dole): We almost struck out at this place, our second choice because the first place we tried was already full, but after being turned away the chef had a change of heart and agreed to accommodate us on the patio. Another amazing meal, the highlight of which was Alison’s desert soufflé. I have honestly never seen a soufflé as tall, puffy, and light as this one. The rest of us pretty much dove in and devoured in front of her it without even asking.

Le Poker d’As: Trip Advisor led us to the Le Poker d’As in Besançon, and it did not disappoint. Again, we were almost turned away by a somewhat surly waiter, only to have the hostess come running out to say “no, no, of course we can seat you.” We were on the fence to begin with, since this was the kind of old school place where we knew we were in for multi-course, potentially four-hour meal, but after being turned away and then begged back, we pretty much had to commit and we were pretty happy we did. The decor and food are classic French country, with a more upscale atmosphere. Although it doesn’t sound very French, I had a chicken curry that was phenomenal.

Le Galobin: In Ranchot we ate at  the very casual Le Galobin, pretty much the only place in town and adjacent to the tie up. This was the most casual and rustic place we ate on our trip, but still great food and wine. Lots of locals.

Au P’tit Kir: This restaurant has been on our list for the past four years—due to its great write up in Food Wine Burgundy—but this is the first year we were actually able to get all the way up to Saint-Léger to check it out. Amazing. Another great find.

Le Terroir: In the wine village of Santenay, we ate at the main restaurant in town, Le Terroir. The center of town is about a 10-15 minute walk from the boat tie up, which we managed to do while dodging downpours. This is another in a long line of casually elegant French country restaurants with great wine. Naturally we choose Santenay.

So that’s pretty much it! Lots of food, wine, and great scenery. Looking forward to next year—we have already reserved Saone Bateau’s newest addition to their fleet, “Fanny.” 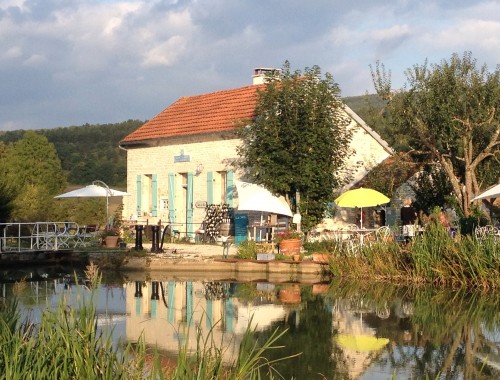